UNL’s Response to the AIDS Crisis: The Early to Late Eighties 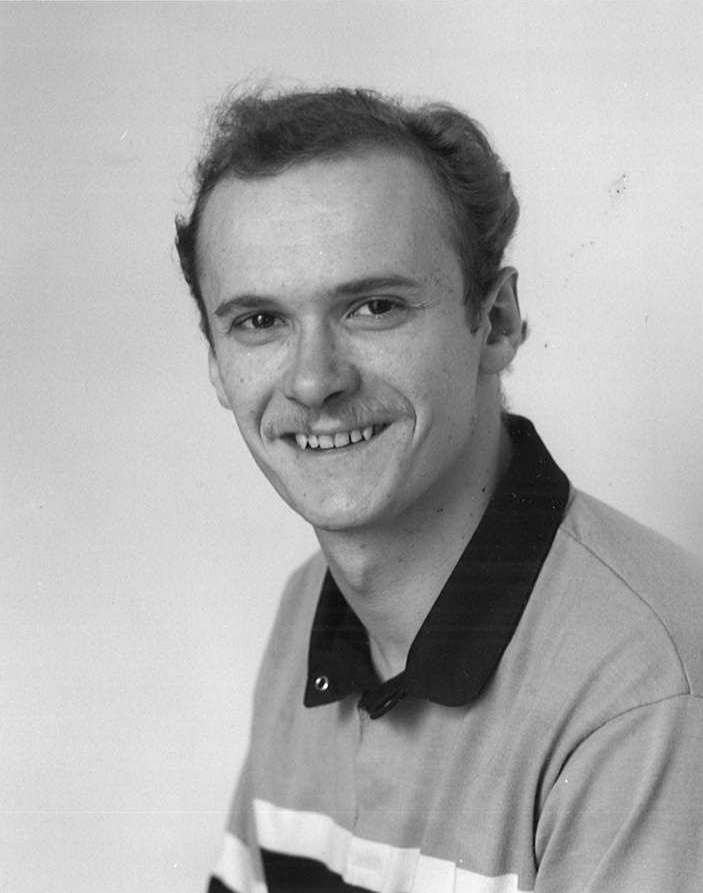 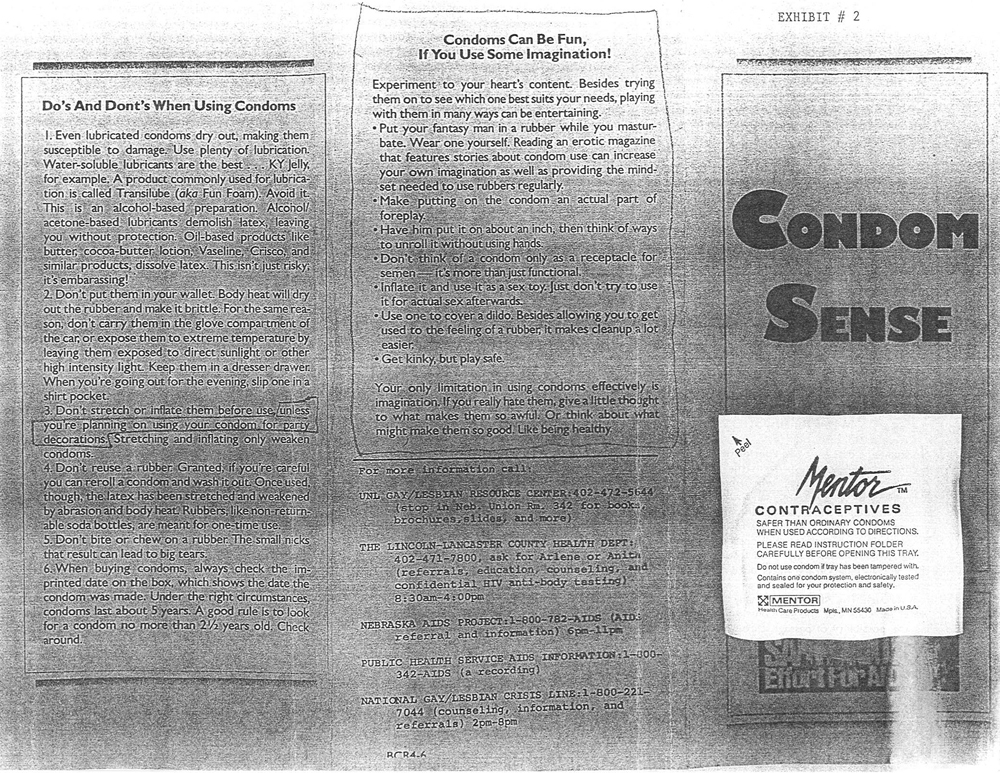 “Condom Sense” pamphlet handed out by GLSA in 1987

To people afflicted with AIDS in the United States during the early eighties to early nineties their death was not a question of if, but when. During the Early 80’s a new Crisis swept through the United States. AIDS, or Acquired Immune Deficiency Syndrome, is something that develops in some people who contract HIV. During the Early eighties to early nineties HIV turning into AIDS was much more common due to the fact that very little was initially known about the new deadly disease. Since very little was known about HIV and AIDS at the time very little treatment options were available. The first drug approved by the FDA for treating AIDS in the USA was AZT, or azidothymidine, and that was not introduced until March of 1987. In essence, this was around six years after the first case of AIDS was reported in the United States in 1981.[1] During this six year span people were dying exponentially. The AIDS crisis affected everyone, but it affected certain groups of people more. These groups ranged from homosexual people to Intravenous drug users. Even though it was a disease that anyone could catch it was still seen as the “gay disease”. Eventually, many atrocious acts and policies were imposed upon the Homosexual community throughout most of the United States. AIDS being seen as a gay disease also led to it spreading even more rapidly. Heterosexual people could not fathom that they could possibly get the disease, even if they contracted the disease through heterosexual intercourse. Nebraska had a similar response. People in Nebraska said, “We don’t have to worry about AIDS. It isn’t our disease.” This was due to the fact that Nebraska had very few cases of AIDS reported during the beginning of the crisis. The first case of AIDS diagnosed in Nebraska was in 1983. [2] The University of Nebraska Lincoln actively tried to educate people about AIDS and had important contributions such as a new way to test for AIDS, a gay and lesbian resource center on campus, and creating the Gay/Lesbian Programming Council.

The Daily Nebraskan, a student newspaper at the University of Nebraska Lincoln, had a recurring theme during the AIDS crisis they claimed that AIDS was seen as a gay disease and that straight people do not want to talk about it. Being gay or lesbian was seen as something morally reprehensible at the time and straight people wanted nothing to do with the disease out of fear of its association with homosexuality. Rodney Bell II, the Gay and Lesbian Student Association of UNL President, pointed out an important misconception in an article he submitted to The Daily Nebraskan he hoped to illuminate the GLSA’s perspective on some issues. Rodney Bell stated “AIDS is not a gay disease. AIDS is a disease that all people can acquire if not protected. This has been an assumption at every meeting of the programming committee.” [3] This statement shows how prevalent the assumption that only homosexual people could contract AIDS was even on UNL campus.

In 1986 UNL’s Committee for Fee Allocation met to hear both sides of a debate on whether or not to form the Gay/Lesbian programming council, a group dedicated to educating students about AIDS. Jeff Warren, a senior engineering student at UNL at the time, said he was against the council forming because it would only benefit a small population of students. Of course, that small population being the gay and lesbian community. This was a good example of how synonymous AIDS was with homosexuality. At the time the gay and lesbian student fee money put into UNL’s system totaled about $90. Some students saw issue with the council being formed because it needed $1500 of student fee money to do so. Some students saw AIDS as being only a disease homosexual people could contract. So, found it outrageous to give a group that only benefits the homosexual community $1500 when the same homosexual community when that community only contributes $90 to that same pool would be outrageous. Mark Whitacre, Chairman of UPC’s Executive Board, said that the Gay/Lesbian Programming Council would put on events for all students. The Programming Council got funded on a one year trial basis and its budget would be decided on a program by program basis. [4]

Unfortunately, some misconceptions and fears about AIDS caused UNL to make some poor decisions when deciding on how to handle an event the GLSA was trying to put together in 1987. The event was put together in response to the the AIDS crisis and it focused on teaching students the importance of safe sex through pamphlets with educational material and by passing out condoms by the student Union on UNL’s city campus. UNL tried to deny the GLSA’s request to put on this event and even tried to obtain a restraining order legally barring them from passing out the pamphlets and condoms. Their reasons for doing so did not seem very solid. According to UNL one reason they denied the request was because of Nebraska Revised Statute section 71-1105 reissue of 1986 which said that you needed to have a license to pass out condoms. It is interesting that at the time the State Health Department had no application for a license to distribute condoms, and had not issued such a license in two years, the State Health Department stated themselves that they would not enforce the statute. UNL also stated that the pamphlets contained “rough language”, even though one of the same pamphlets being passed out was in full view at UNL’s Health Center. Even when UNL was given this information by the GLSA they still tried to gain the restraining order. [5] The restraining order was denied by District Judge Endacott on the basis that UNL failed to show how the pamphlet or condoms pose a threat. [6] The event was delayed, but the GLSA did end up passing out the pamphlets and condoms on February 17, 1987.

Even though UNL administration made some poor choices in how to deal with the AIDS crisis, UNL still made some positive choices in choosing how to deal with students or faculty afflicted with AIDS on UNL campus. James Griesen, Vice-Chancellor for student affairs, said that no student would be kicked off campus for having AIDS. He also said that a task force was being created to determine what would happen to a student living on campus diagnosed with AIDS. [7] Faculty from UNL made some important advancements in AIDS Detection Tests. John Brumbaugh, a genetic scientist at UNL, came up with a test to detect AIDS much quicker and easier. The test slashed the diagnosis time from months to weeks. His test focused on detecting AIDS in the DNA whereas other tests depend on an antibody reaction. To summarize the testing process, Fluorescent DNA was mixed with some DNA from the patient. Then if AIDS DNA was present it lit up fluorescent when scanned with a DNA Sequencer, one of only 4 or 5 to be commercially available. [8]

In 1986 UNL opened a gay/lesbian Resource center on campus. It was built to help spread information to the homosexual community such as Information on the prevention of AIDS. The center had reading materials and a hotline for peer counseling. The Resource center provided speakers for various events to deal with the Gay/Lesbian community on UNL campus and surrounding areas. The center also provided support groups to students. [9] Continuing with their AIDS education initiative, UNL opened an exhibit in Morrill Hall dedicated to looking at AIDS scientifically and one man’s experience with the disease, Martin Brunhouse and his father. The exhibit uses photos and quotes to chronicle Martin’s life from the first time he heard about the disease, to how he treats the infections accompanied with the disease. [10] An Aids education Task Force was established at UNL in 1986. The task force was comprised of 15 members. Some of the members were from UNL while others were from state health organizations. The group helped prevent AIDS, fostered a compassionate atmosphere for people with Aids, and provided the University Community with information on AIDS. James Grieson, associate Vice Chancellor for student affairs, asked the task force to help educate the UNL community about aids and also set aside $4000 of the University Health center’s budget to accomplish this goal. By 1987 the AIDS Education Task Force had already compiled and AIDS resource list and had made it available at UNL’s Health Center. By this time the group had also organized a speaker, Dr. Richard Keeling who is a renowned AIDS expert, to come speak to the campus about aids.[11]

In 1983 an alternative lifestyles bookfair was co-sponsored by the Community of Grace Church, the Sanctuary Bar, and Cherchez La Femme Bar in Lincoln. The bookfair focused on having literature dealing with homosexual issues. The bookfair also had some books on AIDS. The bookfair gave people the ability to get information not available elsewhere. Many Gay and Lesbian people said that it was hard to find homosexual literature in Lincoln. Many bookstores would not carry gay or lesbian literature, especially in Lincoln, out of fear of public opinion. Many people who wanted to get gay or lesbian literature had to special order the book, but many found this intimidating and ended up without the literature altogether. The money raised by the bookfair was given to multiple worthy nonprofit organizations such as the Gay/Lesbian Student Association at UNL and other nonprofits dealing with AIDS research, prevention, and education. [12]

The University of Nebraska Lincoln actively tried to educate people about AIDS and had important contributions such as a new way to test for AIDS, a gay and lesbian resource center on campus, and creating the Gay/Lesbian Programming Council. Aids ravaged the nation and killed millions of people, including homosexual people, heterosexuals, and intravenous drug users. The Aids crisis affected everyone in one shape or another. Whether it was having a loved one die from the disease, or fearing catching Aids, the effects of AIDS devastated the nation. The arrival of the first FDA approved drug to treat AIDS, AZT, in 1987 was too little too late and millions had already died up until this point. Not to mention some of the awful side effects associated with taking AZT. In some cases, it was better to not take AZT altogether because it would end up killing you faster than Aids on its own. Gay and lesbian student groups on campus had strong opinions on AIDS and fought to make sure that the disease was brought to the public's attention. They had to educate the public about the many myths being spread about AIDS at the time, such as that AIDS was only a homosexual disease and that Heterosexuals could not catch the disease. UNL employees and students held some misconceptions about AIDS and even tried to prevent some important events on campus from happening, but in the end UNL, as well as UNL’s gay/lesbian student organizations, made some important advancements to the AIDS testing process and had various resources for helping to educate about and prevent AIDS on campus.  UNL gay and lesbian student groups fought to make sure that they did not become another statistic in the AIDS crisis.

UNL’s Response to the AIDS Crisis: The Early to Late Eighties