A newspaper article detailing Rockefeller's donation to the University of Nebraska for a "social and religious building."

WILL GET $66,666
Rockefeller Offers Two-Thirds Cost Temple Building
The Nebraskan's conjecture of last Wednesday, the Mr. Rockefeller's offer to the University consisted of a building endowment, proves to have been an accurate one. During the Easter vacation the Chancellor issued to the press of the state an announcement of which the following are the important portions:
Mr. John D. Rockefeller, of New York, has offered two-thirds of the sum of one hundred thousand dollars ($66,666.67) for a "social and religious building" for the University of Nebraska on the condition that before July 1st, 1904, others pay the remaining third of the said sum of one hundred thousand dollars ($33,333.33) for the same purpose.
The undersigned, representing various communions and the general public, are organized as a committee to raise the necessary: F. M. Hall, chairman; J. I. Wyer, secretary; Dr. B. L. Paine, F. M. Hall, M. J. Waugh, Henry B. Ward, A. Ross Hill, J. I. Wyer, L. A. Sherman, Laurence Fossler, Lewis Gregory, John H. Humpe, N. K. Griggs, S. H. Burnham, Alexander Berger, Wilbur F. Bryant.
We appeal to the good people of Nebraska for contributions toward this worthy object.
A choice site for the building has been secured.
By the terms of Mr. Rockefeller's offer all the money needed must be subscribed by January 1st, 1904, and be paid in by July 1, 1904.
It is desirable that small subscription should be paid at once in cash, but, where necessary, subscriptions may be paid in three or four installments.
The First National bank of Lincoln is the treasurer and depository of the fund. Any sums remitted to it designated for "The Temple Fund," University of Nebraska, will be duly receipted for. The secretary of the committee will also receive and receipt for any moneys sent to him.
The need of the University for such a building is too evident to require comment. The committee named above will meet in the course of the next ten days, and formulate plans for the active canvassing of the state for the required $33, 333.
As also suggested by The Nebraskan, the Rockefeller offer is the result of Chancellor Andrews' friendship with John D. Rockefeller, Jr., a graduate of Brown during Dr. Andrews' presidency, and was made during an eastern visit made by the chancellor some months ago.
The site of the proposed "Temple" is to be the corner diagonally across from the southeast corner of the campus. It fronts on Twelfth and R streets, and was purchased by the chancellor some time ago, before the rumors of desire for it had opportunity to produce a rise in the price. The benefit of this foresight will accrue to the University thanks to the chancellor's generosity. 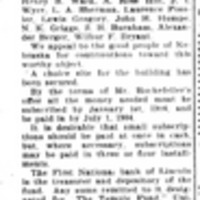