A newspaper article describing the controversy in Nebraska surrounding Rockefeller's donation to the university.

REJECT GIFT OF ROCKEFELLER
People Say Kerosene Was Advanced One Cent a Gallon
Lincoln, Neb., May 9. - In spite of the public support of John D. Rockefeller by Chancellor E. Benjamin Andrews, of the University of Nebraska, the capitalist's provisional money gift for a new building near the university campus will probably be declined. Mr. Rockefeller offered $67,000, if $33,000 were raised by the friends of the university. The students are nearly all in favor of the gift, but the citizens of the State, judging from the comments of the State press, generally are opposed.
Attention is called to the fact that the price of kerosene in Nebraska was raised a cent a gallon a few days after the Rockefeller gift was announced. Miss Sarah Harris, a sister of George B. Harris, the president of the Chicago, Burlington & Quincy railroad and editor of the Lincoln Evening News, published this criticism of Rockefeller.
"Whether to quiet his conscience, or to propitiate the public, a part of which believes a profit cf 100 per cent on one of the necessities of life unrighteous. Rockefeller has given millions to the church and the university. Robin Hood had a better code. He robbed the rich and gave foot to the poor." 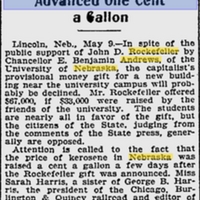